This is Daniel from Wales who is currently supporting Ring20 Research and Support UK CIO: 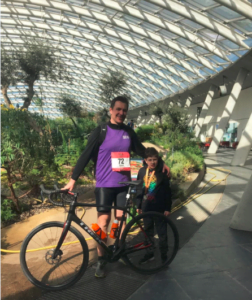 “I am trying to help raise awareness and fundraising for Ring 20 Research & Support UK. It is a charity very close to our family’s heart as my nephew James suffers from the rare Ring Chromosome 20 Syndrome. I was inspired by my sister and brother-in law’s fundraising efforts last year and decided that I wanted to do more to help raise awareness of Ring20 by taking part in as many sporting challenges as I could.  I am hoping to complete 7 this year, I’ve managed to complete 4 so far so I’m on target.

I kicked off 2019 with the my first ever race at the National Botanic Gardens of Wales called the Wildflower Duathlon, it was a chilly morning and an early start on Sunday 10th March.  The race consisted of a 5km run, 28km bike ride and a second 5km run. It was the first time I had to complete transitions between each element and I definitely learnt a lot! It was a tough, hilly challenge but I managed to complete it with my family cheering me on and there supporting me at the finish line. Having James there made a huge difference and definitely pushed me to get over the finish line.

I then took on my first 10km race which was on Sunday 31st March and was the Brecon Carreg Cardiff Bay 10k . I was really hoping to complete in under 55 minutes and was chuffed to beat that with a finish time of just under 53 minutes.

On Sunday 7th June I undertook the toughest challenge I have ever faced – the Dragon Ride which consists of 153 km on a road bike from Margam to Brecon and back, including 6 major peaks which equated to 2,300 metres of uphill climbing at an average of 15% gradient. After the first peak I really didn’t think I would be able to continue the race, let alone complete it, but after a gruelling 7 hours and 57 minutes I finally finished. This is without doubt the hardest thing I have ever done, but for some strange reason I’ve already signed up for next year’s race!

I completed my first ever half marathon in Swansea on Sunday 23rd June. This time I was aiming for a time of sub 2 hours and did it in 1 hour 58 minutes, I really enjoyed the atmosphere of this event and thankfully the weather was on my side.

My next “first” is the Glynneath Triathlon on 22nd September. Swimming is definitely not my strong point so I’m expecting to find this much harder than the Duathlon back in March but I’m hoping I’ll be able to complete in a “reasonable” time!

Then after that, I have already signed up to the Cardiff half marathon on Sunday 6th October and the Richard Burton 10k on Sunday 3rd November. Then I think it’ll be time to break for Christmas!

James is my inspiration and I will continue to help raise awareness of Ring 20 in whichever way I can. I’m lucky to have such a supportive family who encourage me to challenge myself and cheer me on at every event. I’d like to think that my children are encouraged to follow in my footsteps and will never be afraid to push themselves, especially for a cause they care about as much as I care about Ring20.”

We are immensely proud of my brother Daniel’s achievements, his commitment to support our family in raising awareness and his fundraising efforts.  He has raised over £1,500 so far for the challenges he has completed.  As well as undertaking these challenges, Daniel and his wife Katie created a video about James and Ring 20. Daniel self-taught himself to create, cut and edit a video which was absolutely fantastic, and we showed at our charity night event in June 2018. This really helped to show people how Ring 20 has affected us as a family and helped encourage donations.