At present in the UK, there is great flux in all aspects of the lives of families affected by a genetic disorders. The NHS is undergoing major changes in its core structure, the benefits system is becoming more difficult to access and the new Children and Families Act 2014 will completely overhaul the way children with special needs access educational support at school.   All of this change is taking place alongside advances in the science of diagnosis and the availability of treatments for genetic disorders, making it essential for those affected to better understand how the world is changing so that they can be more knowledgeable and more effective advocates.

The goal of the 1st Annual Genetic Disorders Leadership Symposium is to bring together leaders of UK based genetic disorder charities and other patient advocates to create an environment in which they can learn from experts, share best practices and network.   It is of critical importance to help those advocates affected by genetic disorders ‘stakeholders in their own care’, and this Annual Symposium is set to address these and other important topics in a first of it’s kind collaborative event.

Genetics Disorders UK and Global Genes were the collaborative event organisers. They explained that there are 7,000 rare diseases with 1 in 17 people affected in the UK. The number of people affected by rare disease is more than cancer and AIDS combined. 75% affect children, of which 30% die before their 5th birthday, which is truly shocking. This is why it is important to get rare disease on the  political agenda as cancer and recently mental health has been, so that more funding and importance is given to those affected. In bringing together rare disease support groups the hope is that collectively we have a single louder voice to be heard and effect change. 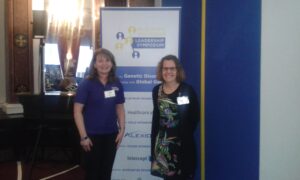 m the AKU Society – pictured left) advised me of this event and what an event it was!

The event started out over dinner on the Friday evening, with nearly 100 delegates representing rare disease support groups/organisations, just like ourselves. We were all seated according to plan – but that was only to 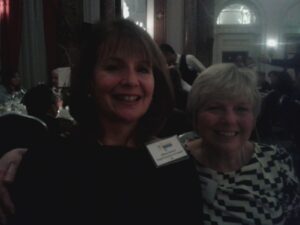 start with! I was lucky enough to be seated next to Beverly Searle from Unique with whom I’ve had a number of conversations, so it was lovely to meet and speak with her in person. Unique have been instrumental in helping us establish ourselves in our first year and recently updated their information leaflet on r(20) syndrome (which you can find on our Knowledge Base page).

Our guest speaker for the evening 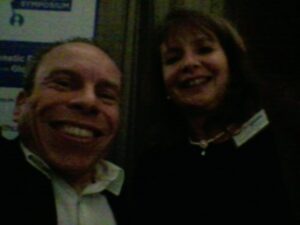 was Warwick Davis, a truly entertaining gent, who spoke about aspects of his life story with humour and emotion! After each course we were told to move around the room, so that we enjoyed the opportunity to meet with a number of the other delegates. I was lucky enough to sit next to Warwick for my main course and he told me how he and his wife had setup Little People UK; it was as a result of people with dwarfism, who having seen Warwick on screen, had got in touch with the couple as they wanted to engage with others like themselves, affected by the same rare disease. Warwick and his wife went out of their way to meet with these people to offer mutual support, but after a while realised that they needed to formalise something or they would spend their free time travelling up and down the country. So they formed Little People UK and now the members meet annually in the UK and with others in the US too. Of course, I had to get a selfie with Warwick!

After a busy evening of eating, drinking and lots of talking we headed for bed as we had an early start for a full agenda the next day!

The first topic of the day was the 100,000 genomes project. The talk was similar to that which Don and I h 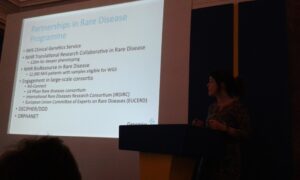 ad heard at the Students4RareDiseases symposium, but slightly more tailored to support groups. It not easy to talk about human genes in laymans terms to the likes of an audience such as us, but Dr Clare Turnbull gave it a good shot. The project looks at 100,000 human genome specimens using whole genome sequencing (WGS). Half of the subject relate to cancers and half to rare diseases. For each phenotype (disease group e.g. epilepsy) there will be 3 subjects, so in total less than 17,000 cases of rare diseases will be studied in this round. A huge amount of money has been spent on new buildings, sequencing machines that are faster and cheaper and a large number of professionals that support the project including researchers. Typically, when a genetic disorder is suspected, specific tests are requested by the medical team, some of which can take a large amount of time or money. The difference with WGS is that the whole genome can be tested for any genetic disorder to be detected, so improving chances for accurate diagnosis and ht ability for researchers to learn more about the disorders.

At the break I was able to ask Dr Turnbull whether WGS would pick up ring chromosomes as we know that certain more detailed genetic tests do not. It was good to hear that she stated it would pick up ring chromosomes, whereas exome might miss this. However, as epilepsy is a ‘common’ condition and doesn’t always have a genetic basis, there is less likelihood of many epilepsy phenotypes being included in the 1st round of studies. Maybe hope for the future?

Next we heard about specialised commissioning in the NHS followed by presentations from 3 support groups on how they had successfully put together patient information booklets. I brought away some examples as this is something that families might find useful for r(20) syndrome in the future?

Before lunch some very useful information was disseminated to us regarding the new Education and Health Care (EHC) Plans and the findings from the 1st 6 months of implementation. Suffice to say that there is some way to go…If you have a child with a Statement of Educational Needs and/or health issues or indeed have already moved to an EHC you may have had some difficulties? One of the key areas being cited by the speakers was that Section F (Educational Section) of the new EHC should include details of any health issues that affect education/learning and should not just be included in Section B (Health section), as they can’t be challenged so easily. If you need help, there are groups out there to support you/your child obtain the support they need/deserve. SOS!SEN provide support to families going through this process, whilst if you need legal support Maxwell Gillott are specialists in this area. I will add details to our Useful Links organisations should you need to.

Following this Robbie Spence from Disability Rights UK provided lots of useful insights into the changes of DLA into PIP. Their website again is a useful mine of information with free downloadable PDFs and information leaflets that can be purchased for a small sum, which may be of benefit to any disabled person in respect of your rights and entitlement to benefits. 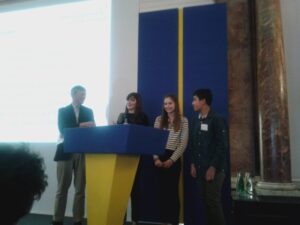 Two different groups then presented how they had approach putting together successful patient registries – something we’d like to have for r(20)! and then just to ensure the delicious lunch didn’t have us napping we were engaged by Dr William van’t Hoff, Head of Clinical Research at Great Ormond Street Hospital (GOSH) and some representatives from the YPAG group – young people who represent the young person’s patient perspective on clinical research studies.

Gene therapy sounds like science fiction, but Prof Bobby Gaspar from GOSH explained how his team have successfully used gene therapy to treat and even cure some rare immune diseases. There is much interest and hope for breakthroughs in this area for others affected by rare diseases in the future.

Our last 3 patient support group presentations were from small charities that have made a big difference. Dr Nick Sireau from the AKU Society explained how he scaled up the work in order to a make a bigger impact for patients – they now how have a centre of excellence in Liverpool and are engaging in clinical trials for a drug that has been repositioned for the purpose. Fiona Copeland from Cilliopathy Alliance talked about how collaboration between patients, researchers and clinicians improves lives for those affected by rare disease and Liz Curtis from the Lily Foundation spoke about how they had brought about a change in legislation to help families affected by mitochondrial disease (you may remember hearing/reading about the recent bill passed allowing 3-parent babies?)

Our final speaker was Stuart Pritchard from Genetic Alliance UK who took us through some facts about the UK Rare Disease Strategy how much progress has been made and what we can expect next.

After a very long and fact-filled day, we said our goodbyes to the many people with whom we had spoken over the 2 days, where new alliances had been forged. The hope is that this will be the first of a regular annual event and I for one, very much hope that this is the case, as so much useful information was shared, which benefits the likes of myself in terms of my own development in the role of Trustee in supporting those affected by r(20) syndrome, but also the families themselves from useful information that can be readily passed on. 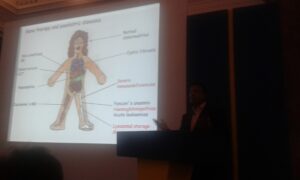 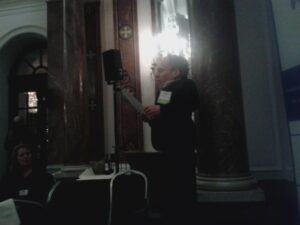 I hope you found this news article interesting – do give us your feedback….