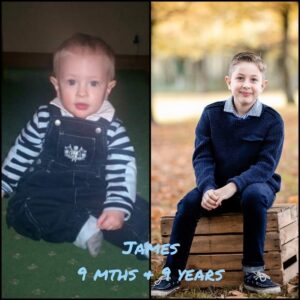 Our gorgeous, perfect baby boy was born on 9th February 2009 weighing 6lb13.5 with no complications, no health issues or concerns, all was going very well with James reaching all his milestones and walking at the age of 9 months.

At around the age of 15 months James was having a few sleeping problems. He would wake through the night having screaming episodes, which were quite frightening for us to experience and not know what to do as he still appeared to be sleeping. We were unable to comfort or unable to rouse him out of what appeared to be night terrors.  We sought advice from the health visitors and Drs who in turn referred James to a consultant who confirmed there were no medical issues and he would grow out of the apparent night terrors.

At the age of three, the terrors had stopped but he was unable to sleep by himself. At least and at last the relief that we were all getting a good few hours of sleep, this was amazing.

In April 2013, I am unable to remember the exact date but just shortly after James 4th birthday, we noticed something extremely strange happening. James would suddenly stop in his tracks and in a freeze like manner as if someone had pressed a pause button on him. At first this would last about 2 seconds.  They gradually but very quickly got longer. The first chance we got we took straight him to the GP.  We were sent to the hospital who had then made referral for us to see the Consultant Neurologist.

Whilst on the waiting list to see the consultant, James’ moments as we called them got worse and longer every day.  They were now lasting a few minutes. Night times were the worst times, as soon as he would close his eyes to sleep the horrendous seizure time would begin and continue all through the night with cluster after cluster lasting up to 20 minutes.  We couldn’t understand what was happening, such a worrying and frightening time.  There was nothing we could do to stop them or help him, this was a living nightmare.

On Thursday 16th May 2013 we rushed James to A&E. When the seizures were seen, it was then that action was taken and James underwent blood tests, MRI scan, CT scan, EEG, and James was started on the drug Phenytoin. James was on a high dosage of this, and his balance went he was falling over all the time, this medication did not work for James.

James continued to have lots of seizures during this time and was also experiencing hallucinations – he would scream out loud, run away and look absolutely terrified.  He would talk about things he could see – talk about hiding from the werewolf that was outside, we had to whisper so the werewolf couldn’t hear us.

James at 4 years old had changed, he was almost a completely different child to the one I knew.  His behaviour had deteriorated and he had gone backwards and his whole demeanour had become so unlike him.

A month before James 5th birthday in January 2014 we had received the diagnosis of Ring20 syndrome.

We have trialed a few medications and combinations including Phenytoin, Levetiracetam, Clonazepam, Carbamazepine. Often having more than one drug at a time, sometimes 3, to both introduce one and wean off another.

James is now currently taking Tegretol (Carbamazepine). He continues to have daily absence seizures which are difficult to recognise.

We are aware of some of the things that can cause James to have a seizure now, such as prolonged periods without food, darkness dimmed lighting, heat –being too hot, illness, high temperature, frightening situations, anxiety seem to be some of the causes.

He is currently at school where he has additional needs help. He struggles to cope with certain aspects of life and has great difficulty in controlling his aggression at home on times.

“We think it is vitally important for research into Ring20. We need much more information and knowledge about the devastating, debilitating disease. Providing information and recognising the impact of epilepsy on suffering individuals and families and to improve the quality of lives.”