“he wasn’t responding to medication and he was in status epilepticus. He regressed to a semi-comatose state and we were told…that this may be his new baseline for the rest of his life” 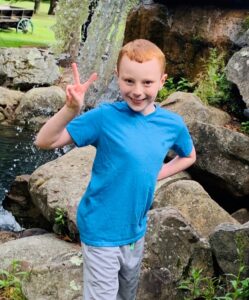 Our son Cameron was born a healthy boy and will be ten years old in April 2021. Cameron was like every other child his age but began to have some difficulties in school in first grade. We didn’t think much of it at the time and went to the doctor and he had a healthy diagnosis other then maybe a mild form of ADD. After much debate and hesitancy we tried a small dose of medication for him. Needless to say that was the beginning of the rollercoaster ride we have been on ever since. That summer after the mild form of ADD diagnosis, Cameron began having hallucinations and began making clearing of the throat sounds throughout the day. We went to the doctors and they were all baffled. A month or so later in between doctor’s appointments, the hallucinations began to intensify, the throat clearing sounds became louder and Cameron started a frequent twitching frown on his face. We were confused and scared.
On July 3rd, 2018 I was at Yankee Stadium with my father and uncle when I [Steve] got a panicked call from Cameron’s mom in the 5th inning that I’ll never forget. “Cameron’s shaking and twitching and he’s not answering me! I’m rushing him to Children’s Hospital of Philadelphia!”. At the hospital, they ran several tests over the course of ten days and ultimately diagnosed him with epilepsy. They put him on a seizure medication and nothing improved as they observed him for several days. They became assertive in sending Cameron home saying we needed to be patient and let the medication do its job. So we went home praying that this medication would work and eager for our tentatively scheduled one month follow-up appointment. Within a week or so, Cameron rapidly regressed and his symptoms worsened. We were sternly told to be patient and wait for an appointment to open and they would not see him right away. I called the doctor every other day insistent that this was urgent and he needed to be seen immediately. The doctor would not even speak to me on the phone and the secretary blew me off and treated me like an annoying pest. Although the doctor downplayed what was going on, we knew time was of the essence and frantically found a doctor who would see him and we went to St. Peter’s Hospital in New Brunswick, NJ for an appointment.
At St. Peter’s we met a kind doctor who was extremely concerned and she immediately had Cameron admitted to the hospital when his behaviors and symptoms were unraveling in front of her. That began a nightmare of events that were nothing short of traumatizing. Over the next several weeks he wasn’t responding to medication and he was in status epilepticus. He regressed to a semi-comatose state and we were told by a highly respected child neurologist in the field for over thirty years that this may be his new baseline for the rest of his life. The hospital neglected to track his ammonia levels at one point and he was in grave danger as we panicked for answers and continued to pray to God.
As several test results came in after months of being in the hospital we started to get some answers in the genetic testing. Cameron was diagnosed with an extremely rare chromosome disorder called Ring Chromosome 20 Syndrome or [r(20)]. r(20) comes with epilepsy and other struggles that are difficult to manage. Being that there are only two hundred reported cases worldwide over the past few decades we had no idea what to expect. However, we were told assertively by the couple of doctors who did have some faint experience that r(20) is not treatable by medication and complete seizure control is impossible. We hate that word impossible and never accept anything that is deemed to be. 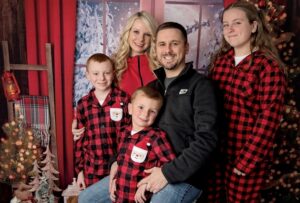 Fast forward to today, Cameron is over two years seizure free and is on a cocktail of more than twenty pills a day. Our son is such a strong, resilient, brave and happy boy. His love for others and for God is so admirable and his kindness is second to none. Our dedicated diligence with his medication and his diet has made all of the difference and brought us to where we are today. Almost every doctor we have met with has said that diet does not really matter either way and Cameron can eat whatever he wants. However, we can say with conviction that it certainly does matter and that a lower carbohydrate and lower sugar intake has been incredibly beneficial! We have all of the faith in the world that God is guiding us in this journey. Cameron’s courage has given him the desire to be a strong student at school and he dreams to be a Broadway performer one day. And he definitely will!
Cameron has bravely been back in school since his release from the hospital and is giving it his all while we fight for the extra accommodations he needs to be successful. We take things one day at a time and are always looking to learn more about r(20). Our goal is to help others understand what we’ve experienced in hopes that what we’ve encountered can be helpful with their child.

The mission of Ring 20 Research and Support UK is an extremely important one and we are looking forward to collaborating with everyone to find answers and educate doctors and families along the way. We truly admire what you are doing and are ready to do all we can to help. Thank you for calling on us to be a part!