There might be many things on a young girls wish-list as she approaches her sixteenth birthday, but what Jacqueline Ball didn’t expect was for her daughter Sophie to say she wanted to jump out of a plane. This is exactly what Sophie wanted and her motivation was to show support for close family friend James, and the charity that support his condition of Ring Chromosome 20 Syndrome.

Jacqueline told us “Sophie was insistent that this was something she wanted to do having seen the challenges that James had been through and so I spoke with his mum and dad, who are close friends, to make sure they were happy for us to do this. I knew it came out of the blue, but Joanne and Mark were delighted that this would raise vital awareness for a little known about condition, while raising funds for Ring20 Research and Support UK a charity that support families affected by Ring20 Syndrome.”

As an on-call fire fighter, Jacqueline is accustomed to danger and so it was natural that she would agree to support her daughter on the jump and with that mum and daughter decided to embark on their first ever skydive.

“What I realised as we started going out and about raising funds, was that around 95% of people we approached had never heard of Ring20”. Armed with information about Ring20 and how it affected families like James’s, Jacqueline and Sophie were motivated to raise positive awareness and funds, and to date their efforts have raised nearly £1,000 with more expected due to some possible match funding. “With information about the condition we were able to start the conversation and soon the pennies became pounds.” 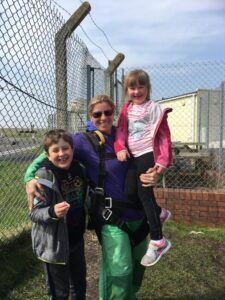 On the day of the jump, James, Joanne, Mark and Moli, were on the ground to support the mother and daughter duo along with family and friends. “As we were going up in the plane, we both felt really emotional, but not because we were doing the jump, it was because it meant so much. We were doing it for James, we were doing it for our little man who has been through so much.”

“I am immensely proud of Sophie who got this whole thing started. Without her unprompted suggestion to do this we would never have done it and the charity wouldn’t have benefitted from the £1,000 raised. ”Through their combined act Jacqueline and Sophie have raised both money and, as significantly, awareness – now lots of people in their hometown of Port Talbot, South Wales know all about Ring20 Syndrome!

When asked if she would recommend others to do a skydive, Jacqueline said in a heartbeat “yes absolutely it was a wonderful adrenaline filled experience, something very special to share with Sophie and for a cause very close to our hearts. At a time when young people get lots of bad publicity it is fantastic to see the good in our young people and to shed a positive light on these actions and the work of this charity.”

In order to further amplify her their efforts Jacqueline also hopes to host a car wash at the fire station – another great opportunity to spread the word and wonderful for Ring20 to have such ongoing support.

Allison Watson, co-founder and Secretary said “we cannot emphasise enough the importance of people like Jacqueline and Sophie to our organisation. Their actions help us drive forward and allow us to continue to grow while achieving improved patient services and investing in vital research, directly benefitting our families like James’s.

If this sounds like something you would like to add to your 2020 bucket-list you might be in luck. Our Chair of Trustees, Don Gordon is assembling a team of ten to do a skydive and create a #Ring4Ring20 in the skies. To find out more contact: Allison Watson ring20@ring20researchsupport.co.uk 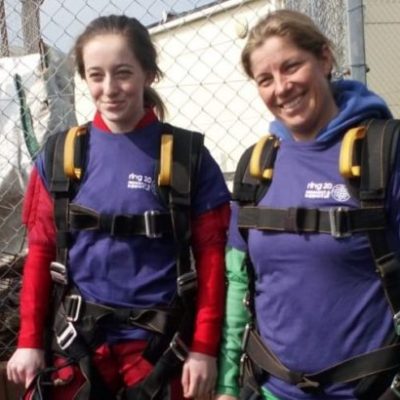 Like most people I wanted to volunteer because of a desire to give back to the community and do something for the greater good.
1 Mins
REad more

Research – Living with a rare disease

Research has shown that patients and carers who live with a rare disease experience a negative impact on wellbeing and mental health.
5 Mins
REad more