Its been and exhausting but exhilarating week, the highlight being attending RAREsummit19 at the Wellcome Genome Campus organised by the Cambridge Rare Disease Network on Monday 23rd Sept 19.

From showcasing our latest poster on our Ring20 stand, to presenting to a packed auditorium of 250 people, to the numerous leads to follow-up in terms of future collaboration – and to top it all I made the BBC News that evening! (check out the video: BBC News video clip).

It was an early start, driving up to Cambridge from Essex to arrive for 8am to put up our new poster and arrange the stand. 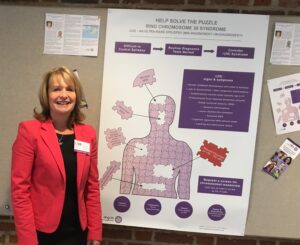 The theme we chose for our our poster was ‘Solving the puzzle’ of diagnosis. r(20) syndrome is perceived as under-diagnosed and likely misdiagnosed. A big part of the problem is the lack of awareness among pediatricians and neurologists of the signs and symptoms of r(20) which are very similar to other rare epilepsies such as Lennox Gastaut Syndrome (LGS) because of the slow spike wave EEG pattern and prolonged non-convulsive status epilepticus (NCSE). Standard panel tests for genetic epilepsy DO NOT currently detect ring chromosomes, so unless the treating physician knows to request a karyotype to test for chromosomal mosaicism (and to submit at least 50-100 cells – which is more than usually submitted), then the chances of an r(20) diagnosis being made are actually very slim. We suspect that a proportion of patients with other epilepsy diagnosis e.g. LGS may actually have r(20), but have never had the diagnostic testing to prove this…DID YOU KNOW that ring chromosomes occur 1 in 50,000 live births? So, why are there only 150 cases of r(20) cited in medical literature worldwide – we would expect a lot more…

Why is diagnosis important? Diagnosis can lead to different options for care and treatment. Very topically at the moment we are all hearing about Cannabidiol (Epidyolex) in the news which is licensed in the US, and has just this week been approved by the EMA in Europe. Whilst there’s some way to go for each European country to determine whether to offer Epidyolex under its own national health system, if and when it is approved for use it will initially only be available to those with a diagnosis of Dravet Syndrome or LGS as an add-on to Clobazam. It may be quite some time before this treatment can be prescribed off-label to other complex rare epilepsy patients such as those with r(20) syndrome – and yet we share the same symptoms as many LGS patients? 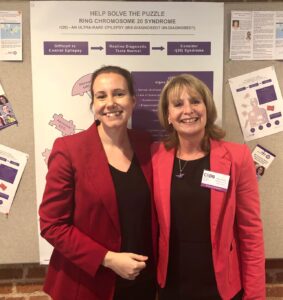 I was privileged to be offered a spot on the patient panel, kicking off the main proceedings of the day. Nervous, but confident in my subject matter I took to the stage and waited for my slot to speak. The panel theme was Patient groups partnering in the drug development process. Something for everyone? and my lovely mentor Ana Mingorance (pictured here)  was facilitating. Ana was appointed to me by EURORDIS  as part of the leadership program I’m following this year and this was the first face-to-face meeting for us, Ana is a neuroscientist and has a background working in drug discovery and development in the pharmaceutical industry. She has worked with the Dravet Foundation in Spain and now works with the LouLou Foundation (which represents CDKL5 another rare epilepsy).

My presentation centered around the fact that as a patient group representing an ultra-rare disease we are at the very start of the drug development journey – in fact, we have some way to go to even take our first steps since we have a limited no. of diagnosed cases, no patient registry, very little research, no bio-markers and have never been involved in a clinical trial. Yet, I turn this on its head and suggest that we are ripe for opportunity! I explained that, even as an ultra-rare disease patient organisation we can still get involved and raise the profile of the disease we represent, which is exactly what I’ve done through my engagement in EpiCARE the European Reference Network (ERN) for rare and complex epilepsies. By simply participating in the discussions and being present, r(20) is getting heard and recognised and I know for a fact that in the regular Clinical Patient Management System (CPMS) sessions – where neurologists from across Europe discus the most complex cases in a virtual consultation session – recently several cases have been suggested to check for an r(20) diagnosis. Even if they’re tested and found not to be r(20), that’s progress! We’re also working on several initiatives to produce educational materials for clinicians and patient families as part of EpiCARE – this wouldn’t have happened if I wasn’t volunteering for them…

Here I am presenting: 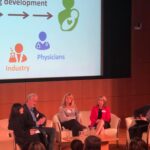 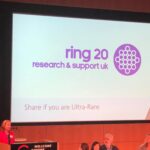 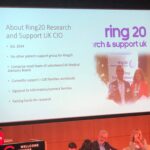 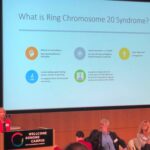 My talk was recorded so I’ll share this as and when it becomes available.

Immediately after my presentation was a much-needed coffee break, however I was approached immediately by two representatives from Illumina ( the company behind the super-computers who sequence the human genome on campus as part of the 100,000 genomes project). There interest was piqued by my talk and they want to talk more to see if they can help us. Jillian Hastings-Ward Chair of UK #Genomes100k Participant Panel popped by my stand to say hello too – we met a couple of months ago when I last spoke at the Sano Genetics event. Next up was Mary Bythell Head of Rare Disease Registration from the National Congenital Anomalies and Rare Disease Registry Service (NCARDRS). We’d previously been in contact with NCARDRS and found that they hadn’t any records yet of r(20) patients, however now they’re interested in speaking to us about how we can change this and we’ve already lined up a call to talk about next steps. 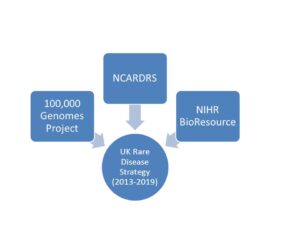 For those of you who don’t know about these 3 organisations, they form the triad of services in the UK created as a result of the UK Rare Disease Strategy 2013-2020, which is due to be renewed shortly. These are key players in genomic sequencing/diagnosis (in which the UK are world leaders), rare disease registration and access to research for rare disease patients. We really want r(20) to be on their radar and we’re working hard to make this happen. (In fact we are also in conversation with NIHR Bioresource Unit to determine how we might get an r(20)/ring chromosome cohort on their books.)

In the afternoon we were challenged to participate in a hackathon introduced by Baroness Nicola Blackwood, Parliamentary Under Secretary of State at the Dept of Health and Social Care. Baroness Blackwood has a rare disease herself and so is a positive advocate for our community. We broke out into groups to cover different topics including diagnosis, care coordination, access to research, cost of treatment and patient empowerment. There was some lively discussion and I shout out for the ultra-rare diseases (including r(20)) where simply the basic needs must be met first and that the onus should not be on small ‘kitchen table’ patient organisations to fund these activities e.g. having a record of patients so its known how many people are affected and how they can be contacted for research participation. The results were discussed as a whole group and the key themes will be written up and presented back to Baroness Blackwood later this year, as input to the next UK Rare Disease Strategy. (This is the 3rd event where I have contributed to input to this strategy in a week, as I’ve also been working as part of the rare disease sub-group for the Neurological Alliance as well as attending an event organised by Genetic Alliance UK, so as a patient group we’re definitely having our say and contributing to the final outcomes!) 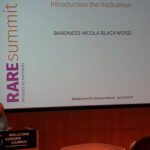 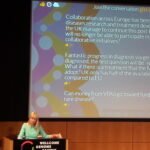 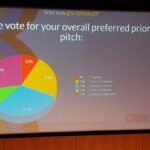 The results are in and research is top of the agenda

There were many friends and acquaintances to catch up with at RAREsummit19  including Rare Revolution, Findacure, AKU Society, fellow EPAG representatives including from Pitt Hopkins, Jelena Aleksic from Sparkbio, Patrick Short from Sano Genetics…the list goes on. Although there are reported to be 8,000+ rare diseases the patient community is quite tight and strong and we all support each other like one big family. Ron Jortner (from Masthead Biosciences and Trustee for CRDN) recently contacted me about r(20) and included us in one of his talks – he’d now like to follow-up with a potential opportunity for us to present to pharma companies in the near future. 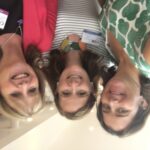 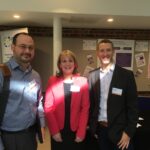 One of the organisers, Joanna Segeith (from Biosynetix) got in touch before the event and we had a brief dialog on the day. Joanna has an idea for a research opportunity for ‘basket’ trials and we’re going to be speaking to Prof Helen Cross re how the 3 of us might take this idea forwards.

Just getting out there and talking about r(20) syndrome really does get us noticed. Perhaps next time one of you will join me as I could really use the support 😉

You may be thinking that many of the opportunities from this event are UK based, but we have to take small steps and start somewhere. My work with EpiCARE means we’re also working at a European level. Next stop to conquer the world – one step at a time…eh?

I’ll keep you posted on any developments. This really is where the magic happens!