Glad Jackie and I made it to the The Rare Disease Day Event at Birmingham Children’s Hospital on 1st March 2018. Gosh it was cold!

A great day which got cut short due to the weather. 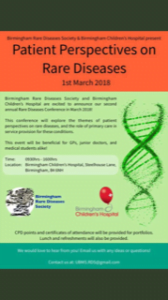 I met a young man who was studying Learning Difficulties at Stoke and told him about us. Another man sat by me who suffers with no immune system.  He has built up a support group over the years like we have done.  I still find it hard to believe we are so ultra rare.

The Star Centre is due to open in Birmingham this year.  Amazing place not like a hospital where families can get together with rare disease. 9 consulting rooms, adult changing rooms, one appointment under 1 roof.  Up to age 18, so not possible for Callum.

So many interesting talks.  Sarah Lipett is an author and musician.  She told us of her rare disease Moya Moya and now has a book coming out soon.  Her artwork of cartoon characters was brilliant! The illustrations were shown through her talk which gave an understanding of what it is like being the patient and seeing it from a child’s view. She did a lot of drawing when ill in hospital – such talent!  I have emailed her as she wanted feedback of her talk. I told her about our group. 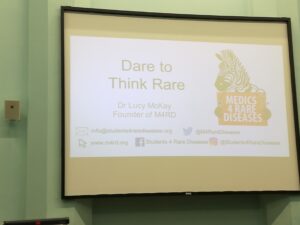 Dr Lucy McKay is involved in rare diseases with students.  She knew about our conference .  Hurrah we are getting recognised!  I have emailed her and will send her one of our DVD’s.

Miriam Al-Attar spoke of one of her patients with a rare disease called TRAPPED.  Very sad when they could not initially get funding for med’s.  They have now through her help.

A phrase from one talk quoted “Nothing about us, without us”.  I thought it was good because if we didn’t have r(20) or talk about it nothing would be known about it.

Jackie was so touched by this day.  She said “it makes you want to say something.”

Spoke quickly in the break to various people and gave leaflets and card to 5 students and Laura who is a geneticist. We may have some contact our group as a result.